(SPOILER ALERT: This is a full breakdown review for “Cordially Invited”)

Welcome back, readers, for more discussion about Rooster Teeth’s fantasy anime-style web series, RWBY. Released on Rooster Teeth FIRST on December 21, “Cordially Invited,” Chapter 8 of Volume 7, has quite a few high points to speak of, including some of the character moments, but it doesn’t feel as narratively strong as either of the past two chapters.

We open on Team RWBY and Oscar Pine discussing the upcoming banquet that Jacques Schnee is hosting as a way to meet General James Ironwood and discuss his seat on the Atlas Council. Weiss is suspicious how he could have possibly won the election against Robyn Hill, and she essentially agrees with Yang Xiao Long’s suggestion that he could be working with Salem. The group decides that Weiss will take a look around Schnee Manor to find clues. Everyone heads off to the Manor, and within the first fifteen or so seconds of Whitley greeting them, his superciliousness reminds me why he was so annoying back in Volume 4. He also reveals that Klein the family butler was fired—probably because he aided Weiss in her fleeing the mansion. Inside, Whitley leads Ironwood, Winter, Penny Polendina, and Clover Ebi off to the dinner, while the rest of the gang hangs back in the hall. Then there’s that Qrowver moment, when Clover says, “Wish us luck,” Qrow Branwen replies, “I mean, they already invited you, didn’t they?” and Clover gives a flirty little Hmm! If you’ve read my recent RWBY breakdowns, then you know how much it bothers me that the show keeps pushing their fortune shtick in our faces. However, this is a cute Qrowver moment, and I have to give the show credit for consistently presenting this ship. I wouldn’t be surprised if they kiss by the end of the volume (either that or one of them dies, which I hope does not happen). 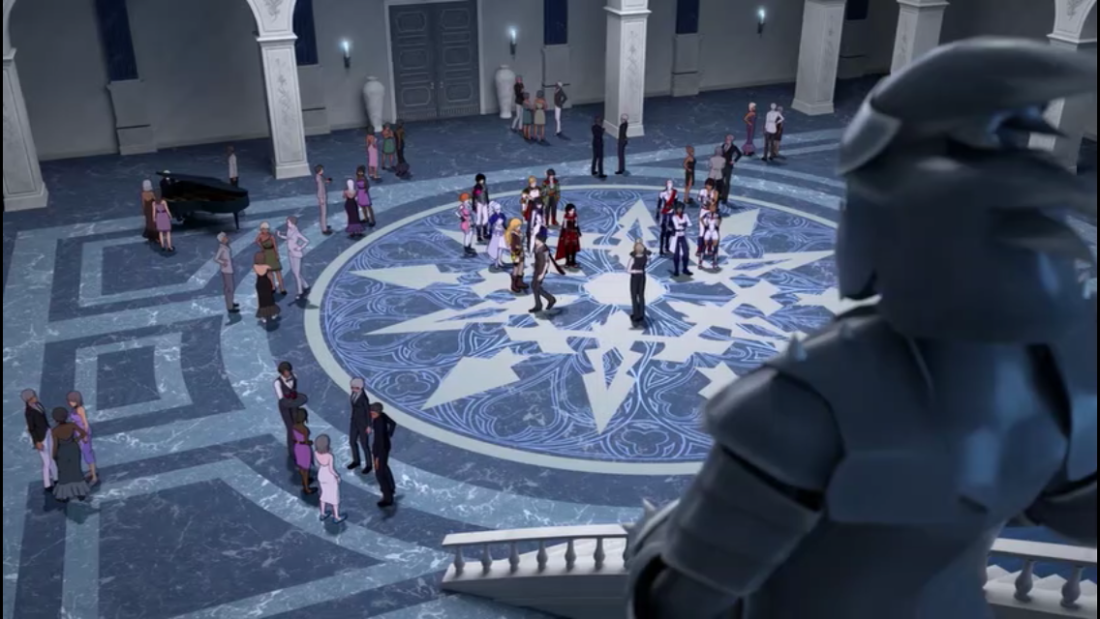 The next bit—Qrow rejecting wine offered by a Faunus waiter—is one of my favorite moments of “Cordially Invited.” It’s a quick, clever way of reminding us both how Qrow is staying clean and sober, and the Atlas/Mantle politics that promote Faunus discrimination. The latter gets another layer added on when Marrow Amin, being a dog Faunus, takes note of the waiter and is essentially like, “I’m getting out of here.”

It’s pretty funny when Harriet Bree tells Team RWBY, “Don’t wander off, don’t break anything, and be ready in case the general calls on you,” and then Yang suggests to her friends, “Counterpoint: how about we do wander off, consider breaking things, and all that other stuff?” While Weiss and Whitley talk, Team JNR is in the background doing just that, with Nora Valkyrie gathering a stack of sandwiches and then throwing it into the air when she “accidentally” trips. It would have landed right on Whitley had one of the party guests not stepped in his path and taken the hit. It’s okay, because she ends up splashing wine on him, forcing him to go and clean himself up, and leaving Weiss free to snoop around the place. This gag is amusing for what it is, and I’m all for irreverent anime humor, but I would have preferred it if RWBY, not JNR, stirred up the mischief.

At multiple points we cut back to the focal point of the episode—the dinner between Jacques, Ironwood’s group, two members of the Council, and Robyn. After watching all the politics that get debated here, I think it’s safe to say Ironwood is in an incredibly tough spot. He isn’t sharing any details about Amity Tower, his critics are being murdered, he’s responsible for the embargo and closing the borders—and these are all things Jacques uses to his advantage as he lambastes the general’s policies. He’s even shrewd enough to invite Robyn to the dinner in order to make it look like he wants to represent the civilians of Atlas. And then, when Jacques implies that it isn’t safe to have Penny in the room, Ironwood says that the footage of her attacking people at Robyn’s rally is doctored and he has her under his control. It’s small things like this which don’t help; he should say that she is innocent and would never harm anyone, since this inspires more trust than the declaration that she’s merely under his control. That’s definitely a flaw of his, the failure to genuinely understand why people mistrust him in the first place. Also, there’s a line about Ironwood having too much autonomous control that leads me to deduct he is the quasi-ruler of Atlas. But this is just an assumption, and I really wish they would explicitly state who runs the government here.

Winter seethes throughout the dinner until she bursts out against her father: “You can’t just buy trust like everything else! You have to earn it!” After she leaves, Penny meets her out in the hallway, and the interaction they have is one I never expected to happen between these two but turns out to be a revealing conversation with dialogue that strike at the core of their characters. We have Winter admitting that the mansion holds many memories for her and that she’s ashamed of losing her temper, while Penny attempts to convince her that it was good to speak from her heart. As for Weiss, she sneaks into Jacques’s study, where we get a surprise introduction to her mother, Willow. She’s an alcoholic, which the show hinted at before, and it appears as if she isn’t of completely sound mind; she initially thinks the party is being thrown for Weiss before remembering that her daughter already left the house. The dialogue and the animation of their body language does such a wonderful job of conveying how apprehensive and wary they are of each other, because what I’m getting from this is each Schnee is uncertain whether the other one is on Jacques’s side. Once Willow realizes Weiss left, though, they let down their guards, and the atmosphere relaxes a bit.

Then Willow reveals that she put a camera in the study (in all the rooms, actually), and she shows her daughter the recording of Jacques’s meeting with Arthur Watts. At the end of the scene Willow says, “No matter what happens, don’t forget about your brother.” Weiss responds, “Whitley wants nothing to do with me,” and Willow says, “Of course not, you left him alone . . . with us.” Finally we cut to Watts, who is atop of a building in a thunderstorm with his umbrella. With his handy little phone he shuts off the city’s heating system as it begins to snow. Oh, and he drops his umbrella, and lets it fall to the streets below (major eye-roll). Seriously, though, this is yet another disruption that will rattle the people of Atlas. We’re clearly building up to a point where everything is going to crumble apart in the next couple episodes. Maybe Ironwood will get overthrown in a coup, or he takes such extreme steps with his policies that Team RWBY and company will have no choice but to stop working with him.

While there are many things that I love in “Cordially Invited”—the politics, the character interactions, the closer look at the Schnee family, Willow’s introduction—it generally felt slower and not nearly as well-paced as the previous two chapters. Plus, I’m still trying to figure out why Jacques had to throw this big party when all he needed was for Ironwood to come to a private little dinner. On the one hand it makes some sense because Jacques is the type of guy who loves to flaunt his wealth and draw attention to himself. On the other hand there are too many characters to keep track of, and the narrative would have felt more focused had JNR and some of the Ace Ops officers been excluded.

I’m interested to see how the rest of the volume is going to handle the Schnee family, particularly in relation to Whitley and whether Weiss can save him. The conclusion of her and Willow’s talk sticks with me—yes, Weiss left behind her brother, but she also had to get out of the mansion. Winter did the same thing by joining the military, but she’s still traumatized by her childhood, as we saw when Jacques was able to provoke her so easily. Let’s also keep in mind that Whitley, as insufferably arrogant as he can be, is just a kid—not only that, but a kid who has to deal with his father’s emotional abuse on a daily basis. It isn’t Weiss’s responsibility to rescue him, but I do hope an opportunity comes along for her to do that so he can escape Jacques before getting too battered.

Another notable thing about the Schnees is that everyone, even the mom, has W names—but not Jacques. Maybe it supports his not being a true Schnee, considering he married into the family (his former surname was Gelé). And his portrait in his study depicts him with dark hair, even though he has white hair now, like the rest of the family. Does he dye his hair? Come to think of it, why do all of them, even the kids, have snowy dos?

If you’ve been checking the RWBYnews on Twitter, you may have found the announcement that May Marigold, one of Robyn’s Happy Huntresses, is a trans woman—same goes for her voice actress, Kdin Jenzen. The thing is, they haven’t touched on her identity in the show, and if this continues for the rest of the volume, then it doesn’t qualify as queer representation in my book. And honestly, it’s really not that hard to squeeze in just one reference to her being transgender.

It’s been confirmed that the total count of Volume 7 chapters is thirteen, meaning we have five more left. The next one will be released on January 4, 2020, a little more than a week and a half from now. We’ll have to wait until then to see what other shenanigans will go down in Atlas. In the meantime, happy holidays, everybody, and see you in the new year—or rather, the new decade!

(Oh, and watch the trailer for Christopher Nolan’s Tenet. I’m tempted to say this movie will be even more of visionary than Inception.)