(SPOILER ALERT: This is a full breakdown review for “A Night Off”)
Welcome back, readers, for “A Night Off” (don’t we all need one?), Chapter 6 of Rooster Teeth’s fantasy anime web series, RWBY: Volume 7, released on December 7 on Rooster Teeth FIRST. In short, this is a great chapter, not the least because it does us Renora and Bumblebee shippers proud.
We open with citizens in Atlas sitting in the streets handcuffed as a result of the riot from the previous chapter. As Robyn Hill gives a press interview, people are lining up at the voting machines to choose between her and Jacques Schnee for the empty Council seat. How does this government system work anyway? There’s never been a clearly defined ruler, like a president or a prime minister. The closest thing we have seems to be General James Ironwood, who holds two Council seats. The next scene takes place in the Atlas Academy training room, with Weiss and Winter Schnee practicing their glyphs and summoning abilities, Jaune Arc testing out his Aura recovery against Nora Valkyrie, and Ruby Rose shooting across the room and splitting her petal form into three parts so they zip around a pillar and come back together behind it. Oscar Pine makes a comment on how everyone is evolving, which contrasts with him not even gaining his Semblance yet; this reminds me of the same sort of thing Jaune faced in Volume 5, which may mean this is hinting at the emergence of Oscar’s Semblance sometime this volume. Then Ironwood and Clover Ebi join them for a moment to tell them they can have “a night off.” But right before that, we have a close-up moment on Lie Ren as he meditates; he turns gray and his Spider-Sense starts tingling, which ends up being in response to Ironwood and Clover’s arrival. The other time they focused on Ren’s heightened awareness was in “The Greatest Kingdom,” when he sensed the Ace Ops approaching. I wouldn’t be surprised if this is supposed to be setup for him using this ability at a crucial point later on.

In Team RWBY’s room, everyone is preparing their own ways to spend their leisure time. Blake Belladonna and Yang Xiao Long are going to a dance club with Team FNKI; obviously this is a Bumblebee date. Ruby makes plans to go to a victory party for Robyn with Nora and Ren. Weiss will be at the movies with Jaune and Oscar. I love the Bumblebee moments, like when they have their impromptu little dance, or when Yang gets asked about FNKI annoying her, and she says, “That’s the thing about dance clubs—I can’t hear you,” which gets a big laugh out of Blake. It’s hilarious when Weiss has a choice between being the third wheel to the date or going to the movies; she takes one look at Bumblebee dancing, and she rolls her eyes and is pretty much like, “Yep, I’m going to the movies.”

As Ruby, Nora, and Ren head to the party, they talk about Salem. Nora points out that Jinn said Ozpin couldn’t destroy Salem, so maybe someone else could do it instead. Not only does this scene remind us of the bigger picture—we’re dealing with the Council election and politics and Amity Tower, but in the end everything revolves around protecting the Relics and defeating Salem—but it also highlights the tension between Nora and Ren, which foreshadows upcoming events.
At the victory party they run into Penny Polendina, who asks where the others are. Nora says that Weiss is at the movies, and Blake and Yang are off doing their own thing, again. Ren says they’re being friends, and Nora responds very insinuatingly, “Friends, huh? Just friends?” “What else would they be?” asks Ren (be quiet, you). Nora says, “Two people who’ve gone through that much? I think there’s more going on.” “Well, maybe one of them feels that way, but the other one might be worried.” So yeah, their squabble keeps going back and forth, using Bumblebee as an analogy for their own relationship. Even Penny asks in puzzlement who they’re talking about, and you can tell Ruby is just bewildered.

After Robyn has a tense talk with Marrow Amin, Ruby, and Penny, she goes onstage to give her speech. In the middle of it we cut back to Renora as Ren says, “You know I’ve never been good with talking.” So Nora says, “Well, then screw talking!” and goes in for the kiss. It’s a bona fide kiss too, with the camera sweeping around them and the background blurring out. I’m absolutely ecstatic at this point, because I’ve always been a dedicated Renora shipper, and I think it’s about time they got past the point where RWBY fans can brush them off as “just friends.” Another reason for my joy is that because Bumblebee and Renora have been compared to each other, the show has confirmed Bumblebee is a thing and we’ll get a good kiss out of it, during the finale at the latest. This is a common tactic on TV shows with gay ships; in order to tackle the issue of fans who view them through straight glasses, the show can encourage them to accept the gay ship in question by likening it to a straight ship. Granted, this quarrel kind of came out of nowhere and it’s a little silly, but who cares—we got green lights on both Renora and Bumblebee out of it. I never even expected Nora to be the first one to acknowledge Bumblebee, so that’s cool. 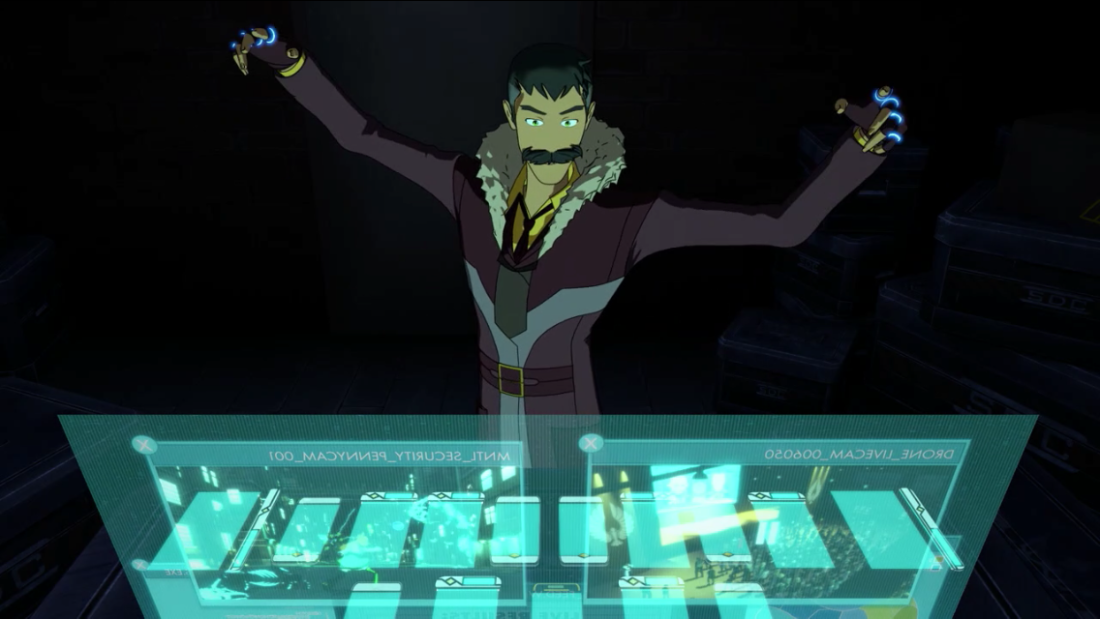 As the countdown begins for the poll closing down and it looks like Robyn is going to win, Arthur Watts breaks into the system in one of the most theatrical hacking scenes I have ever seen on TV or in a movie. He’s got the bank of computer monitors and touchscreens, his fingers are adorned with these weird glowing ring thingamajigs, and he flourishes his arms as if executing a magic spell. I actually like it because it’s so ridiculous. He is also communicating with Tyrian Callows, who’s hidden in the crowd at the victory party—although his metal scorpion tail does stick out, and of course nobody but Ruby notices it. Once Watts turns off the lights, Tyrian kills several people under cover of darkness. He’s about to go for Robyn, but Fiona Thyme blocks him and takes the hit for her. By the time the lights go back on, Tyrian is gone, Penny is up on the stage with her levitating swords and gets framed for the attack, and it’s been announced that Jacques has won the election. The episode ends with Ruby, Nora, Ren, Penny, and Marrow rushing outside and preparing to fight off the incoming Grimm who are being attracted to the surge of negative emotions in Atlas. “A Night Off” is probably my favorite chapter of Volume 7 thus far, giving us two ship confirmations and moving the plot in a direction that reminds me of Cinder Fall’s machinations in Volume 3. I’ll admit, watching Watts hack the Council election brought up some terrible memories from 2016. Now Trump—I’m sorry, Jacques is on the Council, and I predict he’s going to use his newfound political power to attack Ironwood’s plans for Amity Tower or execute a ploy to further sully the general’s good name. I’m very interested in seeing what Robyn is going to do. RWBY has struck a balance with her character where we’re able to sympathize with her, even though she isn’t necessarily nice to Ruby or the others because of their connections to Ironwood. Now that she believes Penny killed people (we don’t even know if Fiona is still alive), she has even more reason to oppose Ironwood. Don’t forget, there’s the shot in the opening credits where she and Qrow battle Tyrian, which might happen next episode.

I noticed that one of Robyn’s Happy Huntresses, Joanna Greenleaf, has a character model that looks considerably androgynous, and the voice actor for the other Huntress, May Marigold, is a transgender woman who works at Rooster Teeth. This is particularly interesting when you combine it with RWBY fans’ trans talk around Nora. It would be great for the show to pursue this topic and give further representation.
All righty then, until the next chapter, I’m riding high on Bumblebee and Renora energy.
Windup score: 96/100