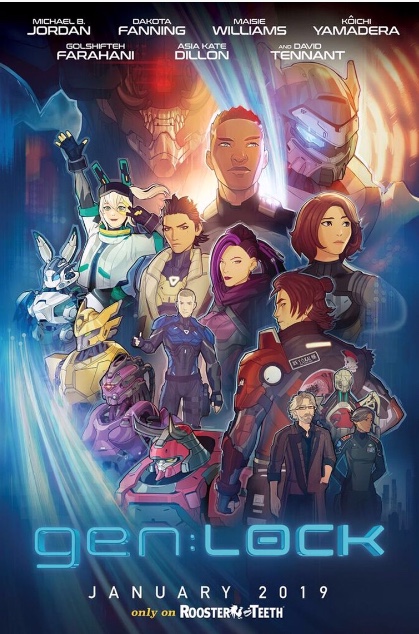 (SPOILER-FREE: Read on for an insightful overview of the web series if you haven’t seen it yet)
gen:LOCK from Rooster Teeth is the smartest, most character-driven, most compelling entry in the mecha anime genre, period.
I’m happy to see how the indie animation studio Rooster Teeth has matured so much over the past few years while sticking to their artistic roots. You may know them through their inaugural offering when they opened in 2003, Red vs. Blue, the machinima science-fiction web series. You may know them through RWBY, the action-packed fantasy web series that I highly recommend you watch (check out my other reviews on all six volumes). Now, Rooster Teeth is heading back to the world of sci-fi with gen:LOCK, a surprisingly star-studded web series set in the year 2068, where the brave soldiers of the Vanguard are fighting off the Union as it sets out to rule the world under a dictatorial regime. It would be apt to draw comparisons to James Cameron’s Avatar, as Dr. Rufus Weller (David Tennant, Doctor Who, Good Omens) presents the gen:LOCK program — a daring plan to enlist recruits who will digitize their minds and upload them to a computerized mainframe stored inside giant mech suits called Holons.
Created, directed, and written by Gray Haddock (RWBY, Rurouni Kenshin), this is a stupendous web series that excels in so many ways, even when it runs into a few potholes. It starts off well with the first episode, “The Pilot,” which introduces us to Julian Chase (Michael B. Jordan, Creed, Black Panther), the main protagonist and Vanguard pilot, Miranda Worth (Dakota Fanning, The Alienist, I Am Sam), his girlfriend and Vanguard soldier, and eventually the Union as they attempt to conquer New York with an army of arachnoid mechs and dark purple clouds of nanotech. This is one of my favorite episodes, as it features the best Julian-Miranda moments and the tightly-written story takes a huge turn that will subvert your expectations.
From there on the gen:LOCK tech comes into play, followed by the introduction of a motley band of recruits who had signed up for the program. One of the best things a story grounded on the team dynamic trope can do is make it hard for the audience to clearly pick one favorite character. This is exactly what the show achieves, endearing the main characters to us with their varying qualities. Personally, I love Cameron “Cammie” MacCloud (Maisie Williams, Game of Thrones, Early Man), the Scottish seventeen-year-old hacker with a bright, spunky attitude and rabbit motifs that are utilized as much more than a simplistic anime trope; and Dr. Weller, the scientist in charge of gen:LOCK, who is witty, manipulative, secretive, pacifist, and overall multifaceted. Then there’s Valentina Romanyszyn (Asia Kate Dillon, Billions, Orange is the New Black), a retired Senior Sergeant of the Ukrainian Special Forces represented superbly by an award-winning nonbinary performer; Kazu Iida (Kōichi Yamadera, Ghost in the Shell, Neon Genesis Evangelion), a former Japanese Sergeant who was demoted to kitchen duty, very likely due to his casual goofiness; and Yasamin “Yaz” Madrani (Golshifteh Farahani, Boutique, Paterson), a fighter pilot with an enigmatic military past revolving around her former ties to the Union. The racial diversity of both the voice actors and the characters is an extra plus.

I’m still amazed that Rooster Teeth was able to grab such major talent for the cast, especially Jordan, who has been part of the project since the beginning, being an executive producer. My favorite vocal performances come from Williams, who livens up Cammie with her brogue, and Tennant, who can take any line with Dr. Weller and infuse it with pensive dignity or sharp wit.
Oddly enough, I had trouble fully connecting with Julian after “The Pilot”; he felt aloof much of the time. However, it all leads up to a plot twist that makes Julian one of my favorite characters alongside Cammie and Dr. Weller, suddenly turning him into an incredibly complex guy struggling to reconcile his identity with everything he thought he knew. In fact, the concept of identity is the show’s core theme, whether it’s related to Julian, Valentina expressing their nonbinary personality, the recruits figuring out themselves as they explore all the nooks and crannies of gen:LOCK, or other various moments that excellently reinforce the theme. The part about the recruits exploring gen:LOCK applies strongly, because the show spends a great amount of time getting creative with technicalities like mindsharing, personality mods, memory leakage, et cetera, that open up the world and allow its rounded characters to properly fill it with their arcs.
I love the irreverent, cheeky humor of RWBY, but I was uncertain as to what kind of humor gen:LOCK would focus on, if any humor at all. So I was pleasantly surprised to chuckle quite a bit at the biting wit sprinkled throughout the show. There are even a couple of Star Wars references, the second of which is one of the funniest jokes overall. The RWBY-esque fight sequences are energetic and well-choreographed; the animators drew the Holons not like clunky mechs but rather like agile human beings, contributing to their natural body movements. I’m equally impressed by the animation style, which shoots for realism over RWBY‘s stylization. Plus, Rooster Teeth is the master of body language animation. They concentrate on showing characters hold hands, touch their arms or shoulders, exchange significant glances, and other visual motions so that when those characters reach a critical point in their relationship, it feels completely real because we’ve picked up on all the signals building up to that point. The series consists of eight episodes that typically last around half an hour. The snappy tone serves the episodes well, making us feel like they genuinely accomplished important goals for the story and the characters. Compare this to RWBY; the most recent volume had thirteen episodes, but each one ranged from thirteen minutes to twenty-six and a half. The shorter length, combined with the possibility of stretching out parts of the story, can make things feel barebones and underwhelming. I advise the RWBY directors/writers, Miles Luna and Kerry Shawcross, to emulate gen:LOCK‘s concise writing.
My biggest complaint about the show is definitely its portrayal of Miranda. She isn’t as much of a major character as she was promoted to be despite the fact that Fanning is listed right after Jordan in the opening credits. Miranda gets pushed off into the role of a side character and acts as a foil for Julian. This is a shame, because she could have been fleshed out, especially since the cast includes many other strong women — Yaz, Cammie, Valentina (when they’re deciding to be female), Colonel Raquel Marin (Monica Rial, Dragon Ball Super, Soul Eater).

I also wish there was something revealed about what drives the Union to engage in their tyrannical actions so they can become a sympathetic villain. We do get to see one person who has sided with them, and maybe they are supposed to be the sympathetic villain. For now the Union is essentially a shadow organization, but perhaps some light will be shed on its true aims next season.
The finale is one of those rarities—an example of thoughtful writing that weaves together all the elements of the story and gives it the ending it deserves. It’s equally important that a few story arcs are left open to juice us up for the next season; make sure you catch the post-credit scene. If you haven’t seen gen:LOCK yet, it is certainly worth binge-watching over three and a half hours.
Windup score: 97/100